No type of vintage Christmas decoration is more of a retro classic than bubble lights, the fascinating heat-activated ornaments that brought a unique sparkle to the holiday decor of the post-war period. 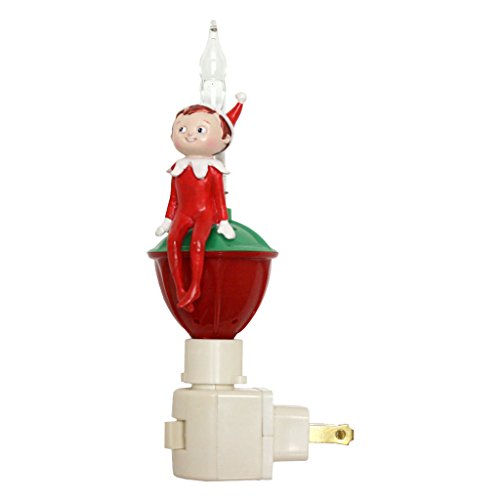 Elf on the Shelf Plug in Bubble Night Light

Bubble lights for use in eye-catching display signs were invented in the 1930s and variations were actually patented by several people as early as 1936. But the man whose design became the basis for the popular holiday ornaments was Carl Otis, a hobbyist inventor who worked as an accountant for retailer Montgomery Ward. His firm declined to support or purchase rights to his invention, however, and he eventually sold it to a Christmas lights manufacturer called NOMA.

As early as mid-1940s the lights were being sold in both the US and Europe, and by the 1950s they had become wildly popular. Though the original light sets were expensive, heavy, breakable, and temperamental, they were a holiday must-have and just about everyone who can recall the fifties and sixties will remember a string or two of bubble lights in a place of honor on the Christmas tree.

Elf on the Shelf Plug in Bubble Night Light with Swivel Base
out of stock
as of May 3, 2022 12:16 am
Check Price
Amazon.com
Marshmallow Campfire Flickering Night Light (165115)

There was always a period of anticipation – often accompanied by some judicious tapping and repositioning – between plugging them in and seeing the first bubbles, but once they were going the effect was outstanding. Fortunately, modern reproductions are lighter, more durable, and more reliable, but they still work on the same principle.

The Science Behind The Bubbles

Bubble light ornaments are actually a surprisingly complex and scientific creation, consisting of two parts: an electrified base unit, which holds a small incandescent light bulb, over which a slender, pointed fluid-filled vial or tube is affixed.

In the classic fifties lights the base was generally made of two-tone ribbed plastic, with the bowl that held the bulb in one color and the lid or cap in a different color. The vial was usually heavy glass, most commonly clear or amber colored, but also manufactured in shades of blue, red, or violet. In modern sets the vial is often made of durable acrylic, which makes them lighter and more break-resistant.

The vial is filled with a fluid that has a low boiling point. The earliest lights used lightweight oil, which was later replaced by the organic solvent methylene chloride. When the lights are plugged in, the heat of the small incandescent bulb brings the fluid a boil and the bubbles rise and float up the vial, creating a fascinating movement and sparkle.

New Variations On An Old Favorite

Though the basic premise behind bubble lights remains unchanged, modern innovations have introduced changes that only increase their appeal. New versions of the popular lights are made of rugged, lightweight materials like acrylics that resist breaking and cracking, and the light-holding bases are often shaped like characters.

The lights have also been successfully miniaturized; the originals were generally four or more inches long from the tip of the vial to the bottom of the base, but “mini bubblers” as small as two inches in length are now available.

This site is a participant in the Amazon Services LLC Associates Program, an affiliate advertising program designed to provide a means for sites to earn advertising fees by advertising and linking to Amazon.